This story is set in the Sinclair Jewels world. 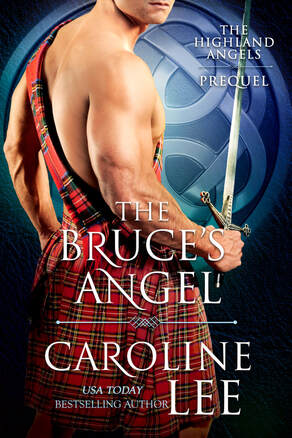 Lady Charlotte MacLeod is desperate to escape marriage to a traitor, so she turns pirate. As the notorious Black Banner, she's able to capture the Queen's ship, and finally get someone to hear her evidence. But she doesn't expect the Queen to be guarded by the man who once stole her innocence and her heart.

Liam Bruce has spent years serving his royal cousin. While he doesn't begrudge this latest guard duty, he does regret that it's keeping him from returning to MacLeod land and the fiery angel he can't forget. But when he unmasks a dangerous pirate in the middle of a desperate battle, 'tis his Charlotte spitting curses at him!

Now it's up to Liam to protect his love from charges of royal treason. Can he convince Charlotte to trust him again? 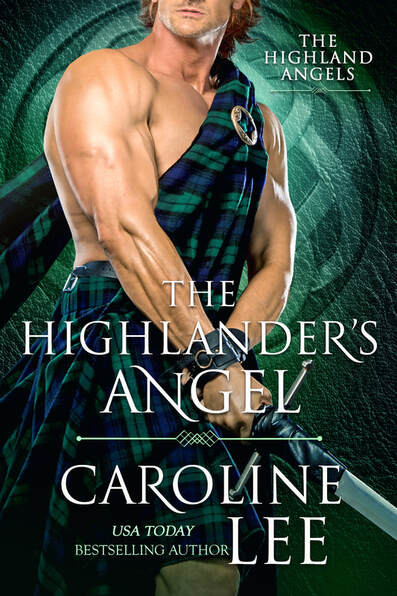 When Robert the Bruce's queen formed the Angels, an elite group of spies masquerading as her ladies in waiting, she probably didn't imagine they'd be called on to save her life. But that's what happens Queen Elizabeth is entertaining the Ross delegation.

Luckily, her lady Courtney is deadly with a bow, and recognizes the assassin. Court's history with the band of thieves and murderers who raised her means she has a very different skill set than most women in the queen's retinue, and she's not afraid to employ it. But she is used to working alone, and the idea of being saddled with an unwanted partner--particularly when that man is gorgeous, dangerous, and a suspect--is galling.

Ross Fraser, the queen's longtime bodyguard, can't believe one of his kinsmen could be involved in this dastardly plot. He'll do everything in his power to prove his clan is innocent of treason, even if it means partnering with a testy and deadly thief-turned-spy... One who holds his heart in her hands after that single night they spent together years ago.

Ross must choose between his loyalty to his laird and his loyalty to his heart, as Court's "family" proves she doesn't even understand what loyalty is. When metal hits meat, can this unlikely duo learn to trust each other, or will the plot to bring down the Scottish monarchy succeed? 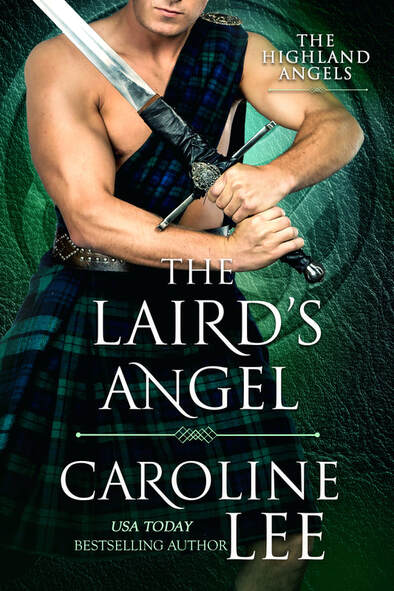 As a member of the Queen's Angels--an elite trio of secret agents, masquerading as ladies-in-waiting to Queen Elizabeth Bruce--Melisandre Lamond has a most useful skill: Seduction. Mayhap 'tis her ability to understand others' desires, or mayhap a yearning for acceptance; whatever the root, Mellie has become skilled in the art of love, and knows all the right ways to get a man to spill his...secrets.

After an assassination attempt on the Queen, all evidence points to the Frasers of Lovat, surely under orders from their new laird, the deceptively handsome Lachlan Fraser. But even Mellie is surprised when the Queen announces the seductive Angel's betrothal to the traitor, wondering how far her loyalty to the Crown really extends. Can Mellie tempt Lachlan into revealing his treasonous plans, before she's forced to actually marry the man?

After the Scottish War for Independence, all Lachlan Fraser wants for his clan is peace. He's happy working with his hands, building a strong future for his family and his beloved daughter. But duty calls him to Scone, where he's surprised to learn of his betrothal to one of the Queen's ladies...the very knife-wielding wench who'd so recently saved him from a cutpurse's attack!

He'll marry her, aye, but Lachlan vows to unravel Lady Melisandre's riddles first! Because once he gets her home and sees the way she effortlessly wins over his daughter, and the rest of the Frasers, he begins to suspect she's not the cold and haughty lady she makes herself out to be. Will this mismatched couple discover the truth about each other in time, before the assassin strikes again? Or will their secrets remain hidden, the consequences of their stubbornness leading to a lethal outcome? 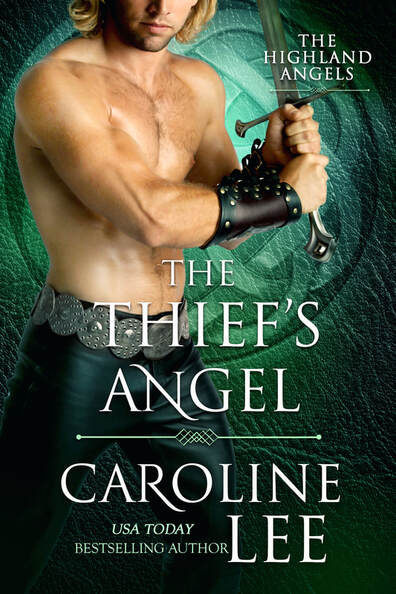 ​Can a Lady who is losing her sight prove the innocence of a thief accused of treason?


Lady Rosalind Forbes is an integral member of the Queen's Angels--an elite trio of spies disguised as ladies-in-waiting--and is the brains of the group. However, she's keeping two secrets from her teammates; one which could endanger their current mission,and one which will certainly jeopardize her very place as an Angel.
​
Cam Fraser used to be the son of a laird, a man with a place. But now he's just a thief and a leader of cutpurses. On a mission to find the woman he betrayed many years before, his search leads him back to his ancestral home, where he encounters a dark beauty, whose touch he can't forget.

Can a brilliant Angel and a charming thief manage to work together to discover who is behind the devious attempts on the King and Queen's lives? Or will Cam become the scapegoat everyone's looking for to punish for those heinous crimes?

It's a race against time, and not only are the King and Queen's lives at stake, but so is Cam's. Rosa knows all three of their fates rely on her, and her ability to see what others may not.

As for Cam, Rosa will either be his strongest ally...or his most powerful enemy.

Check out this fast-paced finale to the series everyone's talking about!

The Black Banner has been the scourge of the Western Isles for as long as there have been stories of fierce and bloodthirsty pirates. But sometimes, a lady is desperate.

Tavish MacLeod is the latest in a long line to wear the black kilt, but life has gotten simpler since his twin sister became Scotland's spy-mistress. Sure, he's pillaging and burning less often, but thanks to his royal connections, he and his crew are handed all the juiciest opportunities to help Scotland's interests at sea. A royal privateer, so to speak.

Which will come in handy, since this latest mission won't just determine the fate of Scotland's monarchy, but Tav's very future!
Lady Isabel de Strathbogie is one of the Queen's Angels, an elite group of spies masquerading as ladies-in-waiting. She loves her place at court, secure in her knowledge of her skills and her place...until disaster strikes. When her young son is kidnapped along with one of the royal princesses, Isabel's desperation rivals the Queen's.

No one can know of this danger to the royal succession, which means Isabel is on her own for this mission... And she'll do anything to save her child, even if it means partnering with an uncouth barbarian in pirate garb. But no matter how he makes her pulse pound and her heart long for something long missing, she cannot allow Tavish MacLeod's allure to distract her.

But when they come face-to-face with the enemy, that very allure might be all that can save her...and the children. Can she trust their future to a man with such a murky past? 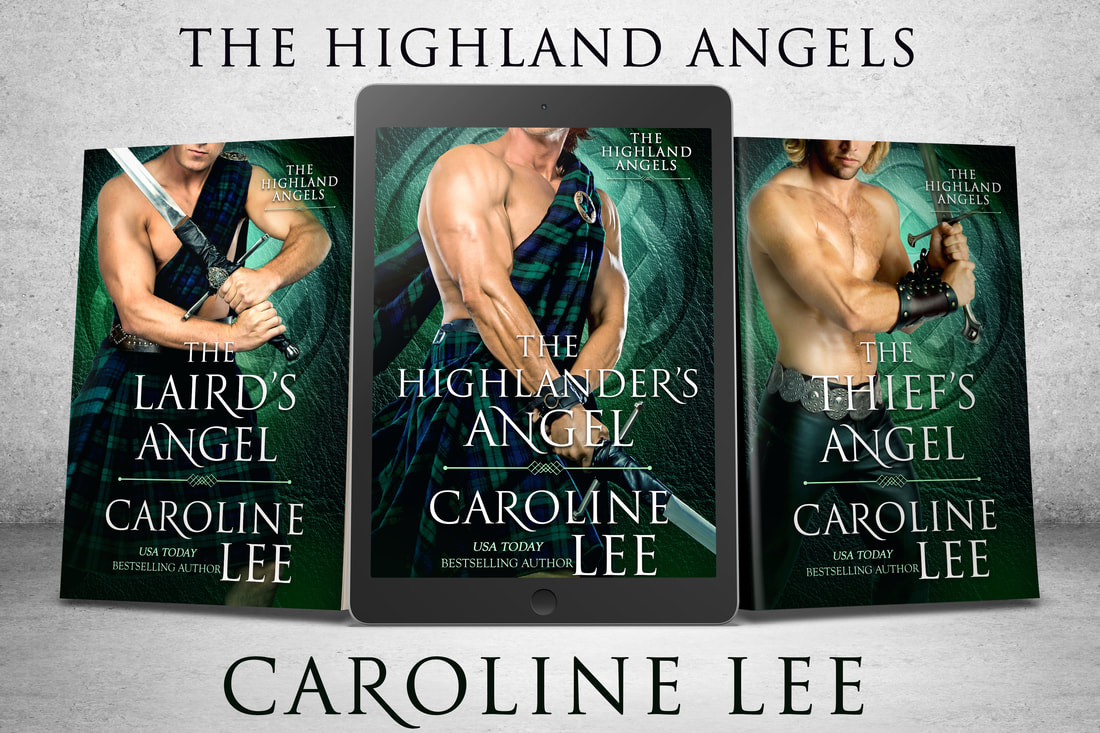