Laird Oliphant has been blessed with six daughters, and not a single son to leave the running of the clan to. What’s a desperate and slightly mad laird to do? Why, take a page from his great-great-whatever-grandfather’s folio, and declare an ultimatum: Whichever daughter marries and has a son first, then her husband gets to be the next Laird Oliphant. There! Only a little bit sexist, and it should get the job done!

Unfortunately, none of his daughters are interested. Take the youngest, for example…

Plaid to the Bone 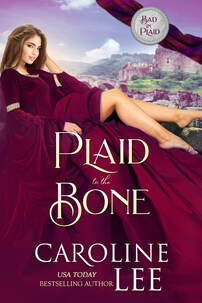 Leanna Oliphant’s goal is to lead as adventurous a life as possible, and it seems as if she’s going to get her wish, even without having to help things along (that fire was an accident, honest!). First, her father made that ridiculous proclamation, which she figures she can ignore, because the dear man is several eggs short of a dozen. Next, a handsome and mysterious man arrives at Oliphant Castle, claiming to be on a secret mission from the king (although he won’t say which king). Then Leanna, through some careful “negotiations,” convinces the delicious stranger to let her help in his mission, which leaves the two of them all alone in a dark and secret passageway.

Then a skeleton drops on them, completely ruining the mood.

As one of His Majesty’s elite Hunters, Laird Kenneth McClure is on the trail of a missing royal messenger. The man’s secret mission had sent him toward Oliphant Castle, so that’s where Kenneth followed, looking for clues to the man’s disappearance. The brawny warrior doesn’t know who he can trust, particularly when one of the laird’s daughters offers to help in his mission. But bubbly Leanna is a ray of sunshine in his dark life, and too enticing to resist.

When the pair of them discover the dead body mid-canoodle, Kenneth is fairly certain it’s not his missing quarry. Almost. Probably not. But…he’s beginning to realize things are not as they seem on Oliphant land, what with the mad laird, hypochondriac lady, more ghosts than he can count, six sisters, one wailing bagpiper, and who let this random donkey wander through the great hall?

Does the delightful Leanna know more than she’s saying? Kenneth’s mission for the king may be the downfall of this crazy family, and he’s not certain it’s worth it.

Warning: Contains silliness. And, like, a lot of anachronistic jokes. And plenty of really naughty bits. If you don’t have a sense of humor, you might want to skip this one. 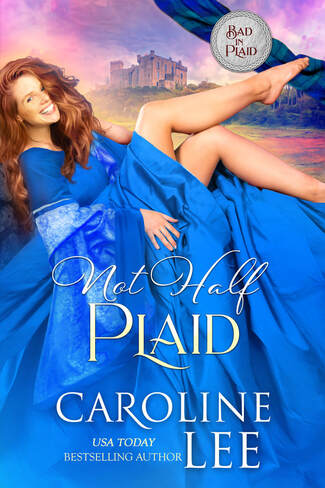 Fenella Oliphant has always thought it apropos she was named after an herb: Useful, subtle, and not much to look at. But here in the Oliphant Castle kitchens, none of that matters, because she’s in command…as long as she can keep from being distracted by the dangerously delicious beast who has planted his shapely arse beside her hearth and is offering unwanted advice.

Brodie McClure doesn’t know who he is anymore. He used be one of His Majesty’s elite Hunters, bodyguard to his laird, and damned strong to boot. Now he’s scarred and maimed, relegated to peeling carrots in the kitchens, watching the most tempting little morsel alternate between blushing prettily and snapping commands. It’s not his fault the woman has no idea how to properly season mutton, and refuses to listen to his suggestions. Clearly it’s up to him to…instruct her.

Sparks—and eggs!—fly before a friend offers a solution: A simple contest, with an assigned ingredient, judged by a panel of three iron-clad stomachs. Fenella and Brodie jump at the opportunity to prove themselves the better chef, but somewhere among the butter, honey and cinnamon, they’re going to have to make a pact to cooperate if they want to get out of this with their hearts—and lower intestines—unscathed!

Warning: Contains food puns. You can’t expect Caroline to write a romcom about two iron-willed chefs and not make phallic jokes. There will also be at least one food fight, because we can’t take any of this seriously. Get ready for another hilarious (and supremely naughty) medieval romp from a USA Today Bestseller!

Ye Give Love a Plaid Name 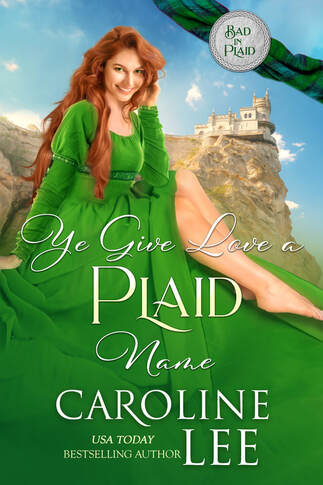 Lady Wynda Oliphant is certain her father’s latest scheme to get her married won’t work, because it’s complete nonsense. And if Wynda knows anything, it’s how to be logical when dealing with her family, her inventions, or even those annoying ghosts who keep pestering her. But there’s one thing that just isn’t logical: the breathless, aching way Pherson Ross makes her feel.

As the Oliphant falconer, Pherson commands some respect within the clan, but he much prefers the solitude of his cottage, with just his raptors and his daughter for company. Wee Wren is the only reason he’s trying so hard to make a life here among the Oliphants, and if they realized what exactly he was hiding from, they’d be sure to abhor him. Aye, ‘tis best to keep his head down, his talons furled, and his daggers ready.

This is working fine, until the laird’s daughter falls—quite literally—into his lap.

Now they’re working together to help Wren learn how to walk again, and Pherson knows ‘tis a bad idea to allow Wynda any closer to his heart. She’s bossy and smart and has a tendency to talk to ghosts—which is ridiculous—but she makes him want to be a better man. With her brilliant smiles and equally brilliant mind, is there any way he can stop falling for her?

When danger finally catches up with him, he’ll do anything to protect his daughter and the woman he’s come to love . . . even if that means turning himself over to the law.

Warning: you’d better tell your old book boyfriend that Pherson will make you consider cheating! Get ready for another sidesplitting romp through medieval Scotland with a brainy heroine, a desperately broody Highlander, an adorable little lassie, and more ridiculousness from this hilarious clan!

Don't Give a Damn About My Plaid Reputation 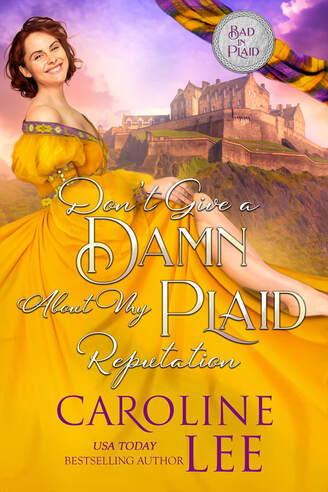 Lady Robena Oliphant loves two things in life: her piping and Laird Kester MacBain. Unfortunately, it seems she is destined to have neither. The prestigious piping competition at the Highland Games is open only to men…and Kester has conveniently forgotten to mention he's betrothed to someone else. The jerk.

Well, she might not be able to do anything about her broken heart, but perhaps ‘tis time she found a way to share her music with the world. All she has to do is cut her hair and don a lad’s kilt….

To end a long-standing feud, the King has ordered Kester to journey to the Highland Games and marry the daughter of his enemy. His heart—and other bits—ache at the thought of giving up his precious Robena, but an honorable laird must follow his King’s commands. When the MacBains are joined on their journey by a curious lad with beautiful eyes Kester knows only too well, and the world's most unlikely mustache, he’s flabbergasted. How do his men not see “Robbie” as the beauty she really is? This journey just got more interesting, if uncomfortable in the kilt department.

Unfortunately, the Games—which mark the end of their time together—loom ever closer. Kester must marry another. But if Robena is brave enough to put her reputation on the line, might she win both her music and a future with the man she loves?

Warning: medieval road-trip romance has never been funnier! As with all of Caroline’s HistRomComs, get ready for hilarious anachronisms, plenty of dirty jokes, and steamy scenes hot enough to need a fan! You’re in for a lot of fun!

A Plaid Case of Loving Ye 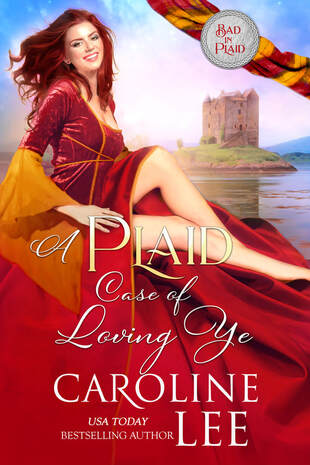 Enemies-to-lovers has never been so funny!

Lady Nicola Oliphant is her clan’s healer…and she needs a break. After years of being at the beck and call of her mother’s (mostly imaginary) illnesses, which are getting more and more ridiculous, Nicola jumps at a chance to escape. Even if that means spending a month in a far-off convent, full of accident-prone nuns who need her healing skills.

But once there, she’s met with a patient she can’t afford to heal.

Ramsay doesn’t remember who he is, and it’s damned galling. All he knows was that he was delivered to the convent of St. Dorcas the Ever Petulant after being attacked and left for dead. Now the warrior is mostly healed, but his head still aches fiercely whenever he tries to remember the details of the attack…or who he really is.

Nicola recognizes Ramsay McIlvain, but since he has reason to hate her clan, she hesitates to confess his identity. But she’s a healer; can she, in good conscience, hold back the information he needs to mend? And the attraction between them is difficult to deny, what with all the kissing and rubbing being done—all in the name of recovery, of course!

When the pair of them are set on a mission to save a helpless bairn, Nicola knows she has to confess the truth. But how will Ramsay react, once he’s surrounded by his clan, where he belongs?

Warning: The medical practices in this story are preposterous…but to be fair, so are a lot of the maladies. Get ready for another hilarious medieval romcom, full of naughty “remedies” and fun!

He Kens if Ye've Been Plaid or Good 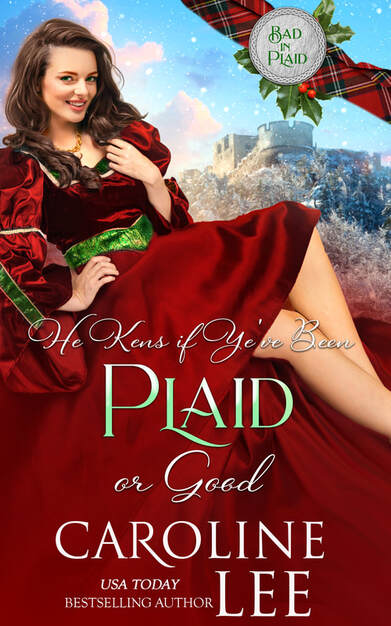 Evander Oliphant is one of the King’s Hunters; feared and respected enforcers of Royal Justice. When he’s handed his latest warrant right before Yule, he doesn’t expect it to be for a woman. And for certes he didn’t expect to take one look at her and fall head-over-heels in love!

This is going to make arresting her super awkward.

All Lady Ysabel Duncan wants is to improve her clan’s morale a bit this Yule season. They’re half-starved and downtrodden, so the least she can do is give them a bit of holiday cheer. But the mysterious stranger who just dropped—half-frozen—on their doorstep, is doing all of that by himself…while still keeping secrets from her.

The problem is, Ysabel knows her future is tied to his. How can she expect to save her clan and her hope for a Happily Ever After, once she discovers his mission in her home? This holiday season just got a lot more ridiculous!

Warning: Yule have to accept plenty of puns (ha!), silly jokes, and particular naughty scenes in this special holiday addition to the laugh-out-loud medieval romcom series you love!