Welcome back to the Highlands! These Victorian fairy tales feature the Oliphant clan, whom we met in The Hots for Scots, but rank on the slightly sweet (and less ridiculous) side of things. If you're a fan of reimagined fairy tales, curl up with some of these cute books, with mid-range heat levels!

The Lass Who Lost a Shoe 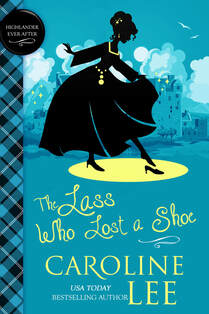 It all started at the ball... All she wanted was one dreamy night away in a pair of fancy shoes. Meeting him wasn't part of the plan.

After years of slaving away for her wicked stepmother, Ember Oliphant is about to make her dreams come true. All she has to do is attend the masquerade ball in a pair of her hand-engraved slippers and convince famed industrialist Mr. DeVille to manufacture her shoes in his factory. Then she'll control her own future and build her own happily ever after.

When Maxwell DeVille arrives in the Scottish Highlands to run a factory for the wealthy Prince family, he's feeling like royalty himself. In fact, the locals are even throwing a ball in his honor! He thinks it's a bit far-fetched, until he dances with an intriguingly beautiful woman...but before he can learn her name, she leaves him with only a single, exquisite shoe to remember her by.

Haunted by her beauty and grace, Max is determined to find his mystery miss. But his search is soon overshadowed by the intriguing Ember, one of the inn's simple serving lasses. With brains, and beauty to match, she is far more interesting than a polished princess!

And as Ember gets to know sweet, thoughtful Max, she starts to reconsider her dreams. Too bad he can't help her finalize the contract with Oliphant Engraving...then everything would be happily ever after. But when "Max" shows up holding her missing shoe, she realizes he's been lying to her all along.

Thanks to the masks they both wore to the ball, Max is beginning to suspect he fell in love with the wrong woman!

Beware: It's going to take a few meddling godmothers, some thoroughly impractical footwear, and a lot of narrative causality to straighten out this mess!

​The Lass Who Kissed a Frog

She needs his help to fetch the golden ball…too bad he’s just a frog!

Vanessa Oliphant has been accused of vanity, but who could blame her? Everyone keeps saying she’s the most beautiful lass born to the Oliphants in a generation! Since the day she was born, Vanessa’s mother has made it frightfully clear her beauty has destined her for greatness.

And the “greatness” Vanessa had her heart set on was Roland Prince, local viscount, and son of the laird. He’s charming and sweet, and handsome enough to make her knees weak.

But ever since Roland overheard Vanessa whispering petty gossip about his brother, he understandably wants nothing to do with her. Realizing she isn’t and doesn’t want to be that type of person, Vanessa sets out on an adventure to find a particularly valuable ancient Roman artifact; an artifact which will help her sister. If she can retrieve the Golden Ball, she’ll show everyone—including herself—she’s not as self-centered as people may think. But she can’t go adventuring all alone, so she enlists the help of a surprisingly intriguing stranger: “Monsieur Grenouille.”

This mysterious “Mister Frog” is none other than Roland in disguise of course—because that’s how fairy tales work, don’t you know? He’s determined to show Vanessa the value of inner beauty, even if he has to humiliate her to do so. But as they embark on their journey to retrieve the golden ball, Roland begins to suspect he may have seriously misjudged her.

What will happen when he bargains for a kiss?
​
Beware: The Guild of Godmothers are up to their shenanigans again in this enemies-to-lovers romance, with just a pinch of spice! You might think you know this fairy tale but be prepared for a fun twist!
​

​The Lass Who Loved a Beast

She owns a publishing house and he’s got a library she’ll never forget…hidden away in a foreboding and beastly castle!

Bonnie Oliphant has endured endless mockery on her quest to own a publishing house. But now that she’s reached her dream, she can’t find authors willing to allow their works to be published by a woman. In desperation, she turns to her sister’s in-law, the brooding and barbaric heir to the laird.

Lyon Prince is known as the Beast of the Oliphants for good reason. Since losing his wife—and much of his face—to a fire, he’s locked himself in his castle with only a few companions, intent on training his battered body back to his old strength. Everyone knows he’s not fit for company…which is why he’s surprised when a beautiful and determined young woman shows up at his door and demands access to his treasured library.

When a blizzard traps them in the ancient castle, Lyon is disconcerted to realize he’s coming to like Bonnie. She’s beautiful, aye, but also remarkably driven and one of the wittiest people he’s met. And it’s not just that he enjoys spending time with her…he’s falling in love with her, and that can’t happen. After all, what chance does a beast have with a beauty like her?

Luckily, whether Lyon knows it or not, he has the extremely silly Guild of Godmothers on his side, and they’re determined to give this beast his Happily Ever After…publishing house and all!

Warning: Contains more kilts than you’d guess in a Victorian-era romance, but who’s complaining? Also, the typical shenanigans from the godmothers, and more than a little narrative causality.